Home BioPhotoContest 2018 A FANTASTIC WORLD MADE OF GRASS

A FANTASTIC WORLD MADE OF GRASS

The prairies can be found all over the world, where rainfall is not so copious to allow the creation of dense forests, but enough to prevent the desert from forming. The steppe, whose word of Russian origin means dry plains, is characterized by a continental climate with very harsh winters and hot summers. The savannahs are typical of the subtropical and tropical zones formed in the presence of particular climatic conditions or due to seasonal fires. This type of environment is found in many transition zones between the rainforest and the desert.

n of the wind that is the cause of drought periods.) It follows that some plants of the prairies develop very deep roots in search of water and nutrients. Grasses, legumes and other herbaceous plants bloom from spring to autumn, making the prairie looks like a painting. The American prairie is colored in dark purple of the pulsatille and in yellow of the golden rod. The Russian steppes are dotted with the violet flowers of irises, interspersed with large swaying stretches of grass. During the dry period fires are not rare, which give new life to the prairie. After a fire, the rains permit to the mineral nutrients of the burnt remains of the plants to enter the soil. Immediately afterwards there is a very quickly explosion of plant development, especially of legumes. In the meadows around the world there are also numerous orchids that, since ancient times, have fascinated man for the beauty of their flowers. Like the Orchis morio or the Anacamptis pyramidalis, just to name a few.

In this herbaceous layer many insects find their home and they reach a very high peak of species during summer. The abundant pollen production of many herbaceous plants is the major source of nutrition for many insects. In addition to nectar-feeding insects, we can also find insects that feed on various parts of the plant such as grasshoppers and multiple beetles, and other insects such as aphids  that possess a buccal apparatus able to feed on juices.

The soil is the ideal place for ants and earthworms that keep it aired as if it was plowed ,favoring the absorption of top-soil in the terrein. In the soil there are many species of scavenger beetles, like spiders and termites, that feed on rotting plants. 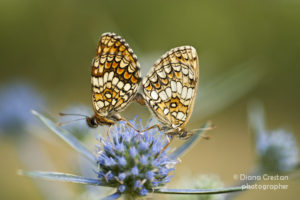 The meadow environment hosts numerous species of butterflies. From the Parnassius apollo that frequents the alpine meadows, to the sought-after Papilio hospiton presents in the Mediterranean steppe of Sardinia.

This great abundance of insects allows, numerous species of birds, to find food. During the period of reproduction some species, especially the tetraonids, use the lawn as an “arena”, where they perform magnificent dances to attract the partner and delimit the territory. Also birds of prey are frequent visitors of the Biome of the prairies and steppes, like the Egyptian vulture, the grillaio and the lanario.